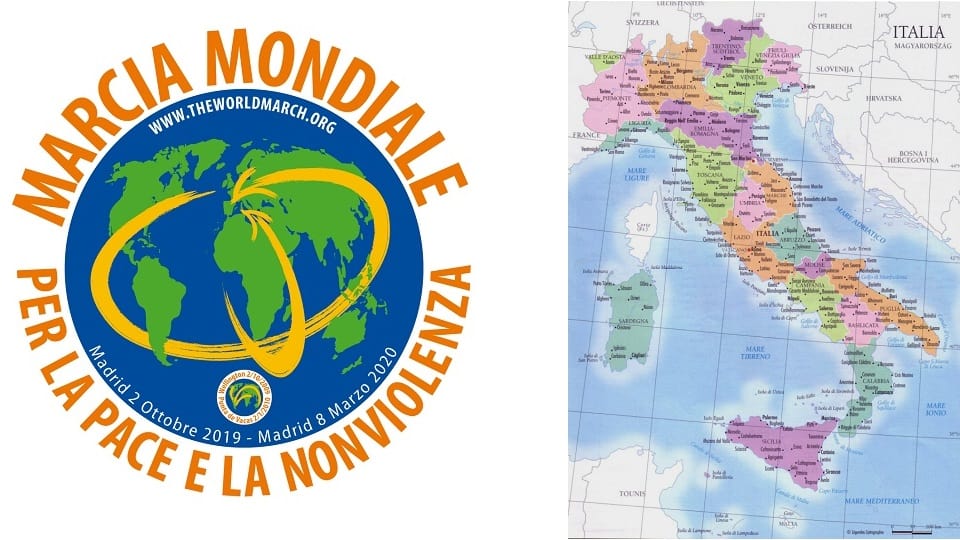 Dear President, last year for Republic Day he declared that “in every area of ​​freedom and democracy are not compatible with those who fuel the conflict, with the constant search for an enemy to identify.

Only the path of collaboration and dialogue can overcome contrasts, and
promote mutual interest in the international community ”.

Dialogue and confrontation since its first edition in 2009 has continued on its path, also from the World March for Peace and Nonviolence, conceived and coordinated by Rafael de la Rubia of the association "World without Wars and Violence", with the participation of people, organizations and institutions from six continents.

The second edition of the World March began in Madrid on October 2, 2019, World Day of
United Nations of Non-Violence and ended on March 8, International Women's Day, in Madrid. In its development, different themes were touched on:

The World March also had from October 27 to November 24, 2019 a maritime route to a Mediterranean of peace and free of nuclear weapons, based on the Barcelona Declaration (1995).

The Italian Committee for the Promotion of the World March for Peace and Nonviolence had to postpone the passage of the international delegation because of Covid19, but in many cities there have also been initiatives on the themes of the March.

On the 74th anniversary of the birth of the Republic, we reaffirm our commitment to the objectives, as reported on April 1 in the international declaration of adherence to the call of the UN Secretary General António Guterres: “May all conflicts stop, to concentrate together on the true struggle of life ”.

In the document Rafael de la Rubia states that “during the recent walk around the world, we have seen that people want to have a dignified life, for themselves and for… loved ones. Humanity must learn to live together and to help each other. One of the scourges of humanity are wars, which destroy cohabitation and close the future to new generations "

The Italian Promoter Committee supports the appeals that have been made since the appearance of Covid-19
to redirect military spending to support health, poverty, the environment, and education. Recall the citizens' initiative bill that is still in Parliament, for the establishment and financing of an unarmed and non-violent civil defense department, promoted by an awareness campaign that has collected thousands of signatures throughout Italy.

We also express our concern about the danger that has arisen in these months of intrusion of the
digital in personal freedoms also through the 5G network.

On this day of celebration, so significant for the country in this dramatic period, there are we turn to you as guarantor of the Constitution in the conviction that it is time (now) to take concrete measures for the well-being of each and everyone and to The environmental protection.

In the new generations, those to whom they often turn, such as during the recent speech for the Capaci massacre, we do not want to leave a world like the one we live in today. We believe that Italy
it should make disarmament a strong point of its politics and economy in line with the Constitution. A first step would be the timely ratification of the United Nations Treaty on the Prohibition of Nuclear Weapons, which touches us closely due to the presence of 70 nuclear warheads at the bases of Aviano (Pordenone) and Ghedi (Brescia), instruments of destruction universal now on the road to modernization. and the existence in Italy of 11 military nuclear ports: Augusta, Brindisi, Cagliari, Castellammare di Stabia, Gaeta, La Maddalena, La Spezia, Livorno, Napoli, Taranto and Trieste.

On the basis of Article 11 of the Constitution, we ask you to intervene quickly in the following areas according to your constitutional possibilities and duties, for the sacrifice of military expenses, the withdrawal of the Italian armed forces in an unconstitutional mission abroad. , and the closure of equal foreign military structures in Italy.

His illustrious predecessor Sandro Pertini supported an Italy that brought peace to the world: “Yes, empty the arsenals of war, the source of death, and fill the granaries, the source of life for millions of creatures who fight against hunger. This is the path of peace that we must follow ”.

Where there are war structures, forests will have to grow (do we want them to grow?) To donate oxygen, that so many people lost during the pandemic and that we also need to nurture dreams, and see them flourish in the lives of nascent generations, who are in great need of places of culture.

With our best wishes.
Italian Promoter Committee World March for Peace and Nonviolence

1 comment on "To the esteemed President of the Italian Republic"