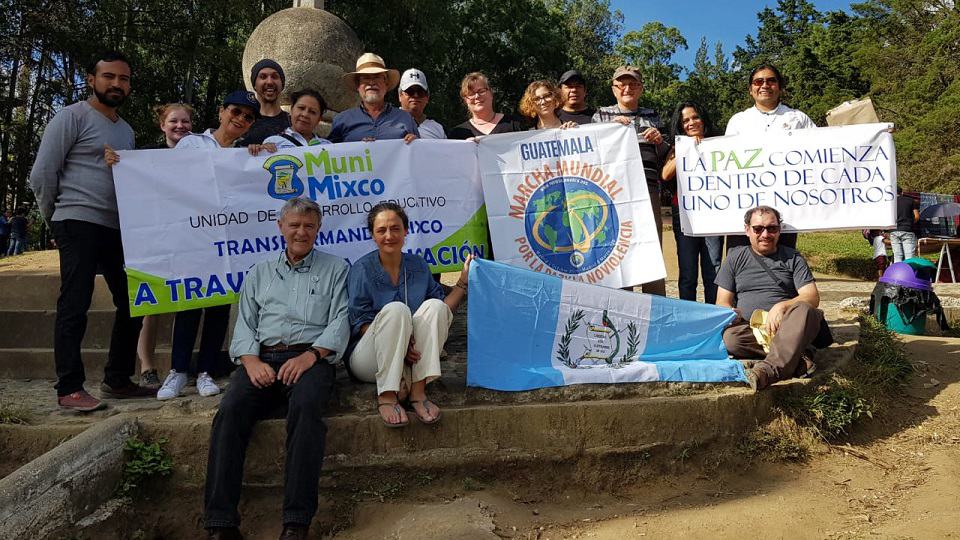 In this newsletter, we will see that the Base Team of the 2 World March for Peace and Nonviolence arrived in America. In Mexico, they resumed their activities.

We will also see that activities are carried out in all parts of the planet.

And that, by sea, the march continues between difficulties and great joys. We will see some days of your logbook.

The World March develops its agenda in Mexico: Mexico City, San Cristobal and Guadalajara between the 8 and the November 15.

The stay in Mexico came to an end and continue to the next country. The Marchers go to the border, to Ayutla, to cross the Suchiate River.

The 2 World March in Guatemala: Ayutla, SF Retalhuleu and Quetzaltenango. Tight schedule in different departments of the West.

Tribute to the victims of the so-called War of Soccer ”between Honduras and El Salvador. The March develops its agenda in Mexico Wet backs of the World March Tribute to victims of "Soccer War"

While the Base Team of the World March was in Africa, also when it made the leap to America and continued its activities in Mexico, Guatemala, El Salvador, Honduras ..., in other countries different activities of the march were also carried out.

Given the serious circumstances that occurred in Bolivia, a call was made from the World March for the UN to intervene against the wave of racist violence in progress following the coup d'etat.

In Ecuador, a great Cavalcade for Peace is prepared and the Montubia de Guayas, Manabí and Los Ríos Integration Committees are preparing for this great event. The Cedhu joined the March, organized events for December. Call for UN intervention in Bolivia Horseback Riding for Peace and Nonviolence After the start of the March, Brazil

In Peru, we can see activities such as those of Cerro Azul, with recognition of Mundo sin Guerras, Namballe pilgrimage to Cerro el Huabo and Symbols of Non-violence in Lima.

Since the passage of the March through the Canary Islands, including Lanzarote, they have followed and continue to perform a variety of actions, here we show some of them.

In Palmira, Colombia, in accordance with the 2 World March, informative acts and walks for Peace are being carried out.

After the start of the 2 World March, we highlight some activities in El Salvador. After the start of the March, Peru After the start of the March, Lanzarote Activities for Peace in Palmira, Colombia After the start of the March, El Salvador

The Mayor of Recoleta, Chile, supports the TPAN. This is an example of La Marcha's contribution to cities and towns expressing their support for the Nuclear Weapons Prohibition Treaty.

The Peace Boat, said in Piraeus, Greece. Taking advantage of the occasion, in one of its rooms the 2 World March was presented with the assistance of public, associations and authorities. Mayor of Recoleta signs the TPAN The World March in Piraeus, Greece The section of the March for Sea, the Mediterranean initiative Mar de Paz, continues with its navigation, we see everything in its logbook.
And, from the ground, the contribution to that navigation is also explained.

Logbook, night of 9 and 10 to November 15:
On the night of November 9, in view of the weather forecasts, it is decided, in keeping with the calendar for the rest of the stages, not to go to Tunisia.

Logbook, from land:
Tiziana Volta Cormio, tells in this logbook, written from the ground, how the first maritime route of the World March was born.