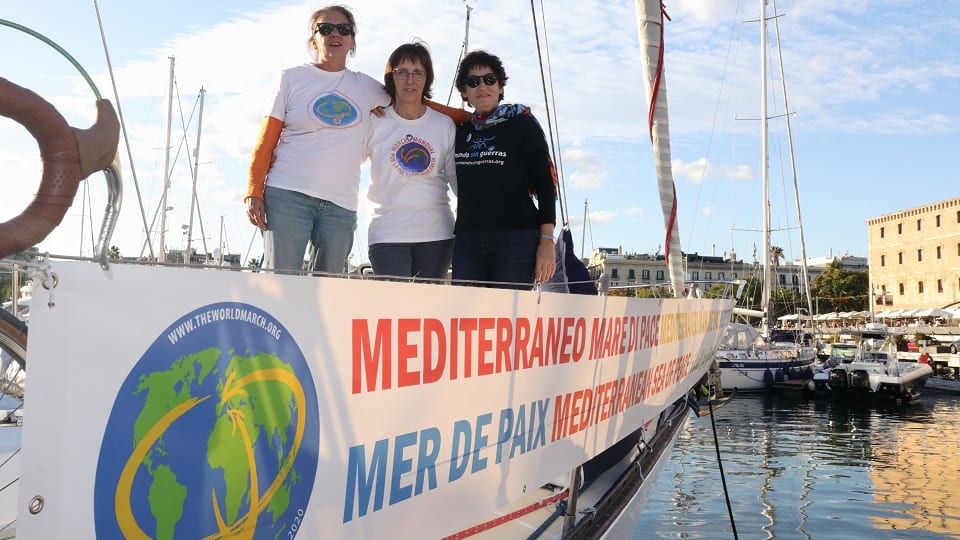 The activities of the Base team of the 2nd World March continue in the American continent. From El Salvador it went to Honduras, from there to Cota Rica. Then he went to Panama.

Some of the activities carried out in places far from the Base Team will be shown.

With regard to the March by Sea, we will see that he made the last sections.

Activists of the 2 World March (2MM) attend an event at the University with numerous students.

Activities carried out by the World March Base Team in Honduras.

The 25 / 11, International Day for the Elimination of Violence against Women, activists of the World March participate in the demonstrations of San José and Santa Cruz, Costa Rica.

The base team is in Panama. He has been doing different activities: at the Museum of Freedom, interviews in the media, at the Soka Gakkai International Panama Association (SGI). The Base Team of the March in Panama

The March for the Mediterranean continued, arriving in Palermo and ending in Livorno, from where the Bamboo set course for its base on the island of Elba.

In Palermo, between November 16 and 18, we received and were welcomed with joy by various associations and participated in a Peace Council meeting.

Between the 19 and the November 26 we close the last stage of the trip. We arrive in Livorno and the Bamboo sets course for its base on the island of Elba. And the activities were multiplying in different countries.

The schools of A Coruña will celebrate the next school day for Peace and Nonviolence (30 / 01 / 20) making human symbols with the Peace symbol or the Nonviolence symbol with their students.

This November 17, in the context of the 2nd World March, a march was made from the El Dueso prison to the Sanctuary of the Well Appeared.

On the occasion of the International Gender Nonviolence Day a solidarity event is held with a round table of professionals on the subject, a poetic recital and a Jam Session on November 23 in A Coruña. Human Symbols of students A Coruña Activities of the March in Santoña, Santander A Coruña against gender violence

In the city of Córdoba, Argentina, an intervention was carried out under the motto “United Schools for Peace and Nonviolence”

Invited by the Association of Plana Lledò residents of Mollet del Vallès, the 2nd World March was presented.

On November 21 there was the 9th edition of the delivery of the “Arma is not a toy” stamps in Londrina, Brazil.

The day is approaching when the Base Team will arrive in Brazil; The activities have not stopped. A funding campaign for a documentary has started. Córdoba: Schools for Peace and Nonviolence Presentation of the March in Mollet del Vallès 9ª edition a Weapon is not a Toy Activities in Cotia and financing campaign

This November 24 from 2019, the city of Valinhos, Brazil, marched through a world without war and without violence.

The Peace Boat, said in Piraeus, Greece. Taking advantage of the occasion, in one of its rooms the 2 World March was presented with the assistance of public, associations and authorities.

Today, at the Casar the day Against Gender violence was held with the realization of a human bond and the inauguration of a Monolith.

The tireless campaign team of the Caribbean has communicated regularly with all the states in the region and has helped them in their ratification processes. Valinhos marched through the world without war Antigua and Barbuda ratified the TPAN