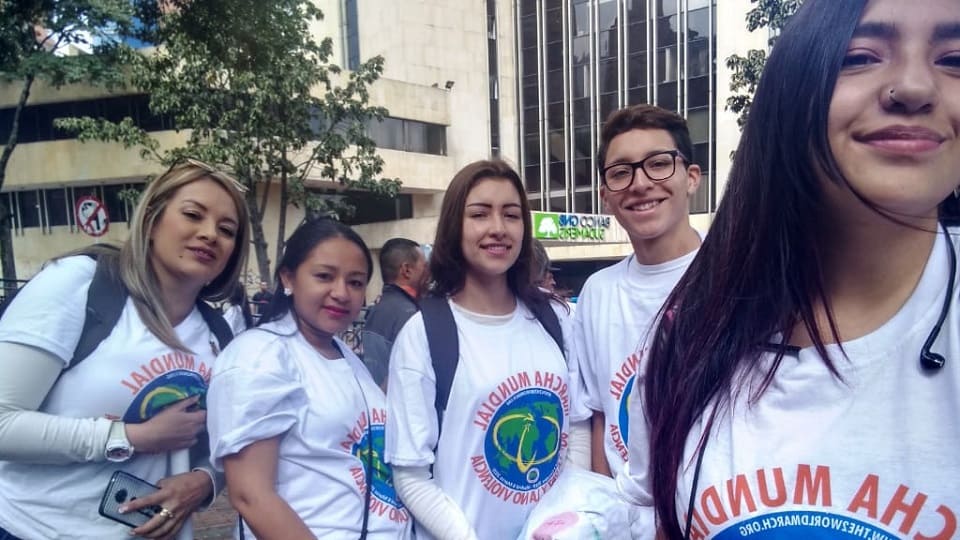 We present here some acts in which the Marchers of the International Base Team participate while they continue their tour of America and also some of the activities that are carried out in many countries.

Activists of the 2nd World March meet with the students of the José Joaquín Salas school.

This was announced and they got it well; a cheerful and numerous entourage received the Marchers.

On October 27 and 28, a forum was held in Costa Rica with the motto “THE GREAT TURN OF HUMANITY IS IN OUR HANDS”.

Students from three schools with a student from the Faculty of the UN came together in the Municipal Pavilion. Colombia ready to receive the March International Forum for Peace and Nonviolence Four messengers of peace are in Ecuadorian territory representing the 2nd World March.

The World March Base Team visited Loja, their first activity was at the Gerald Coelho Convention Center.

32 national and foreign artists participate in this event for Peace and Nonviolence.

Manta, Ecuador, welcomed Pedro Arrojo, a member of the Base Team of the 2nd World March. Base Team arrived in Ecuador Guayaquil Exhibition for Peace and Nonviolence Member of the Base Team in Manta

We offer a summary of the passage of the Base Team of the 2nd World March through Colombia.

This December 14, 2019 the Base Team of the 2nd World March arrived in Peru, we see some of the activities in this country. The March in Colombia, 4 to November 7 The Step of the Base Team through Peru

In many other countries the activities of the March have been giving color to towns, cities and human groups.

The International Day for the Elimination of Violence Against Women opened a Red Bank in the Plaza de los Tilos in Fiumicello Villa Vicentina, Italy.

At the end of the "Days for the Rights of the Child", a Ginkgo biloba was planted in Fiumicello Villa Vicentina, Italy.

In relation to the "Day Against Violence against Women", in Fiumicello Villa Vicentina, Italy, activities between November 25 and 29. Closing of “Days for the Rights of the Child” This December 1, promoters of the 2nd World March of Lanzarote participated in the cleaning of the coast of Lanzarote.

The 2ª Macha Mundial has been declared of Municipal Interest in Lomas de Zamora, Argentina.

Organized by the association Energia per i Diritti Umani ONLUS, a Nonviolence workshop was held in Rome.

On December 1, the World March was present at the 13th Migrant March in Sao Paolo, Brazil. The March of Interest in Lomas de Zamora Enriching Workshop of Nonviolence in Rome The March in the 13ª Migrant March

Several videos made in educational institutions of San José de Costa Rica within the week of Nonviolence.

Several institutions adhere to the World March and prepare events. Logbook of activities in Ecuador