The citizens of the world have the right to celebrate the entry into force of the Treaty for the Prohibition of Nuclear Weapons (TPAN) that will take place at the United Nations on 22/1/2021. It has been achieved thanks to the signatures of 86 countries and the ratification of 51, to which we thank for their courage in taking on the great nuclear powers. Within ICAN, a campaign that has promoted it and for that reason received the Nobel Peace Prize in 2017. These days, more than 160 events are being held in countries on all continents to support it.

This CyberFestival is one of them. It intends to make its small contribution to a process that will continue to expand until nuclear weapons are completely eradicated from the planet and turn the page to this dark chapter of human civilization.

For 10 uninterrupted hours, a program of videos will be broadcast through Zoom channels and Facebook that review historical concerts and festivals for peace and against nuclear weapons with emblematic songs, statements, actions and support of personalities from the world of culture, sports and the political sphere, testimonies from historical and current referents, Nobel Peace Prize statements, support from parliamentarians and municipalities, support from organizations, even actions in the social base of activists, ordinary citizens, young people and school children that with their marches, exhibitions, initiatives in collectives, schools, universities and symbols of Peace defend everything that has to do with a world without wars and, of course, free of nuclear weapons.

In this CyberFestival World Cultural FREE OF NUCLEAR WEAPONS ¡A great step for humanity! 190 events are collected in which hundreds of organizations and hundreds of thousands of people from all continents participate.

Some are historical events and have to do with the recognition of actions and contributions that marked an era.

Others, the vast majority, are actions and contributions made in recent years in favor of peace and, specifically, of the elimination of nuclear weapons.

There is a detailed program with all the contents, schedules and participants.

Other contents: In addition to the aforementioned contents, some documentary and information about the 157 events These days are held on all continents by ICAN organizations.

It is important the making this new historical stage visible. As we can all verify, the approval of TPAN, being one of the most important events in the world, is not on the front pages of the big newspapers or opens the newscasts of the big TV networks. It is the situation that in many countries whose governments have supported and / or ratified the TPAN their own citizens do not know it. There is a serious concealment maneuver of this issue by the media. That is why it is our commitment to make this important fact visible at the popular level in an attractive way, giving it maximum diffusion and supporting the aspirations of the younger populations who are clearly against these weapons.

Given the long duration, the final content will be recorded so that it can be made visible at other times according to the interests of each.

ORGANIZATION: Although the initiative has been promoted by MSGySV, this CyberFestival is the result of the joint work of many people and groups and covers a great diversity of relationships and countries.

The aspiration is to repeat this CyberFestival when a new group of countries join the TPAN, in a dynamic of growth until reaching its final eradication. 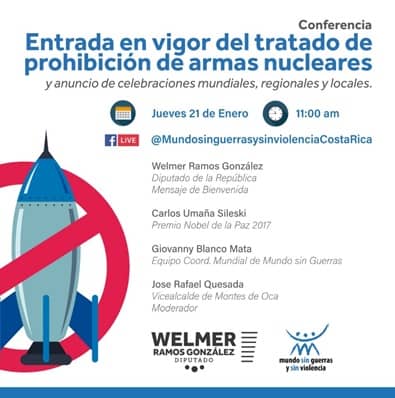