On the morning of the October 21 Mrs. Fatimetou Mint Abdel Malick, President of the Nouakchot Region received a delegation from the World March made up of Rafael de la Rubia and Martine Sicard of the Base Team (EB), along with Lamine Niang and Sire Camara, of the World March Promoter Team in Nouakchott.

As usual, the treatment given by Fatimetou FAM with his sincere attention and dialogue attitude 10 years after giving a very special welcome to the EB in a khaima with typical food and festive evening on the outskirts of Nouakchott.

Since then there have been several occasions of reunion either in the World Forum on urban violence in Madrid as in the different visits to Nouakchott de Martine S. de World without Wars and without Violence.

The activities carried out so far in the March were reported

On this occasion it was informed of the activities carried out in the preparatory phase as well as in the early stages of the March, where 14 cities have already been traveled.

The central themes of the 2ª World March, among which are: the Nuclear Weapons Prohibition Treaty (TPAN) backed by numerous mayors and parliamentarians in different parts of the world. 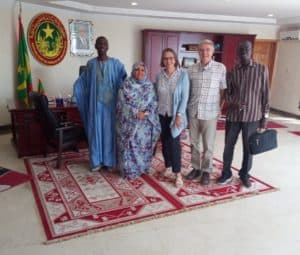 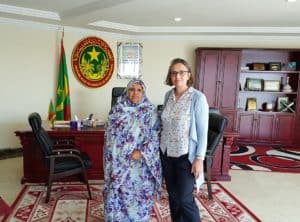 In this regard, the possibility of screening the documentary was offered » The Principle of the End of Nuclear Weapons» which has already been screened in several cities, either as part of the next film festival Nouakhortfilm or leaving this activity open in Nouakchott for the future.

Another theme was the social participation of young people and their growing concern for the environment, on which Fatimetou was particularly sensitive, as well as the monitoring of the 2nd World March in schools as an opening to other cultures and "ethical commitment" of the students with whom they publicly assume that they will never use their knowledge against another human being...

The availability of other tools to raise awareness of nonviolence in the form of training workshops was used.

Sire Camara, on the other hand, presented the event in preparation for next Wednesday, 23 / 10, emphasizing the attention of young people's concerns, agreeing that they are the key to a better future for all.

1 comment on "Meeting with the President of the Nouakchott Region"