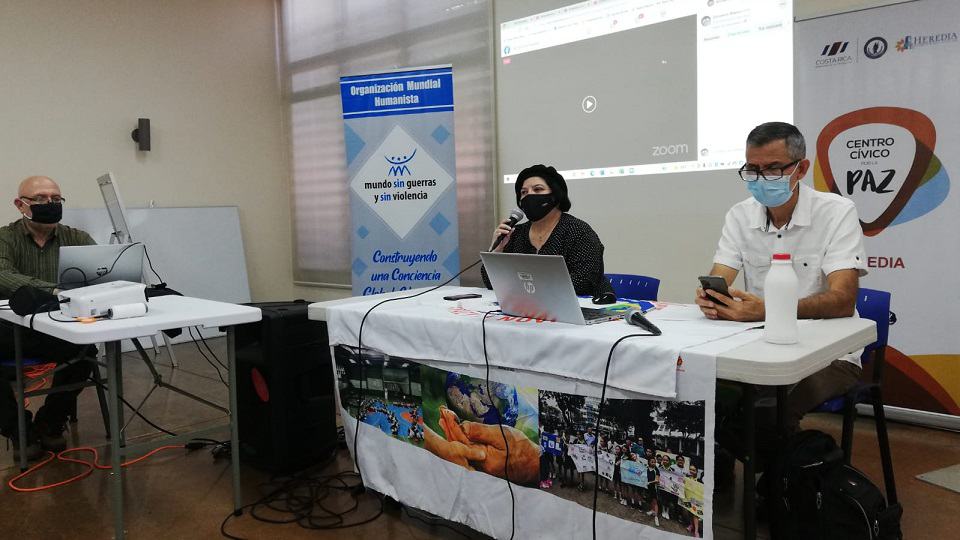 The Latin American March closed with the Forum "Towards the nonviolent future of Latin America" ​​that was carried out in virtual mode by Zoom connection and retransmission on Facebook between October 1 and 2, 2021.

The Forum was organized into 6 Thematic Axes with the background of positive nonviolent action, which are described in the following paragraphs:

1.- Pluricultural coexistence in harmony, valuation of the ancestral contribution of native peoples and how interculturality can offer us the possibility of incorporating this contribution in the nonviolent future that we want for Latin America.

Within this section, the Wisdom of the Original towns as a contribution towards the nonviolent future of the region.

2.- Friendly, multi-ethnic and inclusive societies for all people and ecosystems:

Towards the construction of Inclusive Societies, nonviolent and with sustainable development.

Creation of legislation and culture in favor of Equal rights and opportunities for all excluded, discriminated and immigrant populations.

As well as to guarantee our survival with well-being and that of the different forms of life on the planet.

The discussion on inclusive societies for all people and ecosystems, towards the nonviolent future of Latin America, was on this axis.

3.- Nonviolent proposals and actions that can serve as a model to mitigate the great problems of structural violence in Latin America:

Regional or community proposals for nonviolent solutions, organized for the recovery of spaces and societies in search of reversing the problems of structural violence, economic violence, political violence, as well as violence caused by drug trafficking.

The discussion included was Nonviolent Proposals to mitigate structural violence in Latin America.

4.- Actions for disarmament and for nuclear weapons to be illegal throughout the Region:

Making visible actions in favor of disarmament, the conversion of the role of the armies and police forces in the region, by a preventive citizen police, the reduction of military budgets and the prohibition of wars as a means to resolve conflicts, as well as as well as the prohibition and stigmatization of nuclear weapons in the Region.

The lecture was Actions for Disarmament in the Region.

5.- The March on the internal path for personal and social nonviolence simultaneously:

A discussion was held on Mental health and inner peace necessary for personal and social nonviolence simultaneously.

6.- What Latin America do the New Generations want?

What is the future that the new generations want?

What are your aspirations and how to generate spaces for their expression, as well as to make visible the positive actions that they generate based on the creation of new realities?

The conversation referred to Exchange of experiences of the new generations.

We are grateful for the efforts of so many speakers, participants and listeners from different countries, Latin American and not, who have made this Forum possible, which from its different aspects has shown that there is a way of seeing and building the world that implies the establishment of cooperative human and social relations based on an attitude of active nonviolence, understanding, respect and cooperation.

In this way, different ethnic groups and cultures do not separate populations but, on the contrary, propel them towards an exchange that enriches them in their uniqueness and diversity, strengthening step by step the historical trend that weaves together peoples in the creation of a Universal Human Nation.