Home » News » Press Notes » Towards a future without nuclear weapons 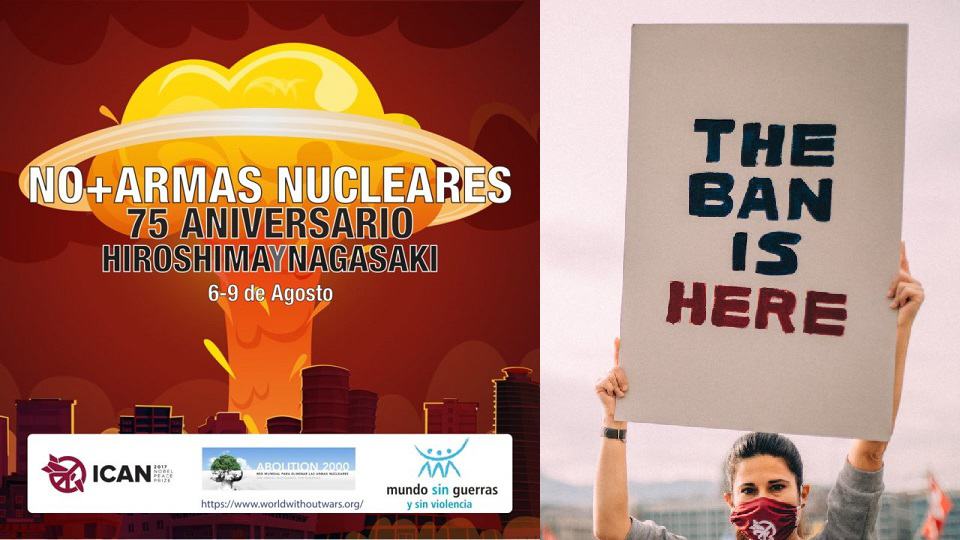 -50 countries (11% of the world's population) have declared nuclear weapons illegal.

-Nuclear weapons will be banned just like chemical and biological weapons.

-United Nations will activate the Treaty for the Prohibition of Nuclear Weapons in January 2021.

On October 24, thanks to the incorporation of Honduras, the figure of 50 countries that have ratified the Treaty for the Prohibition of Nuclear Weapons (TPAN) promoted by the United Nations was reached. In three more months, the TPAN will enter into force internationally at an event at the United Nations headquarters in New York.

After that event, TPAN will continue the path towards a total ban on nuclear weapons. These 50 countries will continue to be joined by the 34 that have already signed the TPAN and are pending ratification and 38 others who worked and supported its creation at the UN. Tensions may arise in the rest of the countries due to pressure from nuclear powers to silence the will of the public, but, in all cases, it will be the citizens who will have to raise our voice and pressure our governments to act. join the general outcry against nuclear weapons. We must make this clamor continue to grow until the nuclear powers become more and more isolated, while their own citizens demand to join the dynamic of preserving peace and not promoting disaster.

A huge step that opens up unimaginable possibilities until recently

The entry into force of TPAN is a huge step that opens possibilities until recently unimaginable. We consider it the first brick removed from the wall that has to be demolished, and having succeeded is a sign that progress can be continued. We are facing perhaps the most important news of the last decades at an international level. Although there is not a single piece of news in the official media (propaganda), we predict that this dynamic will expand, and more quickly when these hidden and / or distorted actions by the dominant powers can be made visible.

The main protagonist of this achievement has been the International Campaign to Abolish Nuclear Weapons (ICAN), winner of the Nobel Peace Prize in 2017, which has indicated on its twitter account the importance of the event, which will come into force as of January 22, 2021.

In the recent World March we have found that even in countries whose governments support TPAN, the majority of citizens are unaware of this fact. Given the international situation of conflicts and uncertainties about the future, in the midst of the pandemic that affects us, there is a saturation of negative signals and “bad news”. Therefore, to support it more effectively, we propose not to influence the fear of nuclear disaster as a mobilizer, but, on the contrary, to emphasize the reasons for celebrating the ban.

The association World without Wars and Violence (MSGySV), a member of ICAN, is working to hold a great celebration on January 23 to commemorate this historic milestone. It will have the virtual format of a cyber-party. It is an open proposal and all interested groups, cultural actors and citizens are invited to join it. There will be a virtual tour of the entire history of the fight against nuclear weapons: mobilizations, concerts, marches, forums, demonstrations, statements, educational activities, scientific symposia, etc. To this will be added all kinds of musical, cultural, artistic and citizen participation activities for a day of Planetary Celebration.

We will develop this action in our next communications and publications.

Today we join the statements of Carlos Umaña, ICAN international director, who excitedly stated: "Today is a historic day, which marks a milestone in international law in favor of nuclear disarmament ... In 3 months, when TPAN will official, the ban will be international law. Thus begins a new era… Today is a day for hope ”.

We also take this opportunity to thank and congratulate the countries that have ratified the TPAN and all the organizations, groups and activists that have worked and continue to do so so that Humanity and the planet begin to walk the path that leads to the elimination of nuclear weapons. It is something that we are achieving together. We want to make a special mention to Peace Boat that, from Japan, in the celebration day, has remembered and recognized the work that MSGySV carried out for the ICAN campaign on TPAN throughout the entire WW2 journey.

We continue working with everyone for peace and nonviolence. Among the new actions planned, MSGySV will hold a webinar aimed at students and faculty from various universities within the framework of a series of them that the Permanent Secretariat of the Summit of Nobel Peace Laureates has scheduled in the coming months. The theme will be: "Actions in the social base and their international escalation"

With the impulse of these and many other actions to come, we reinforce the announcement that we made on October 2 to hold the 3rd World March for Peace and Nonviolence in 2024.

The original article can be found on the Pressenza International Press Agency website: The Prohibition of nuclear weapons opens a new future for humanity.