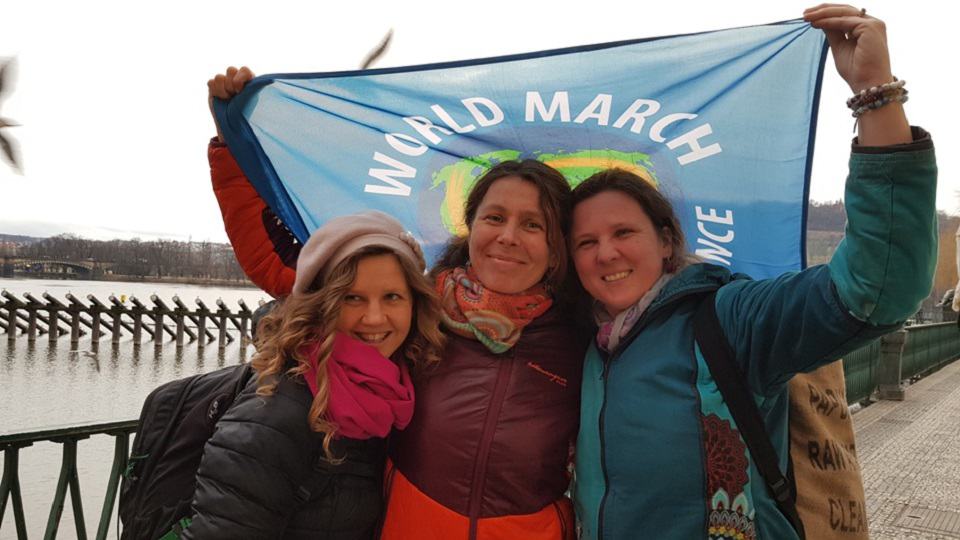 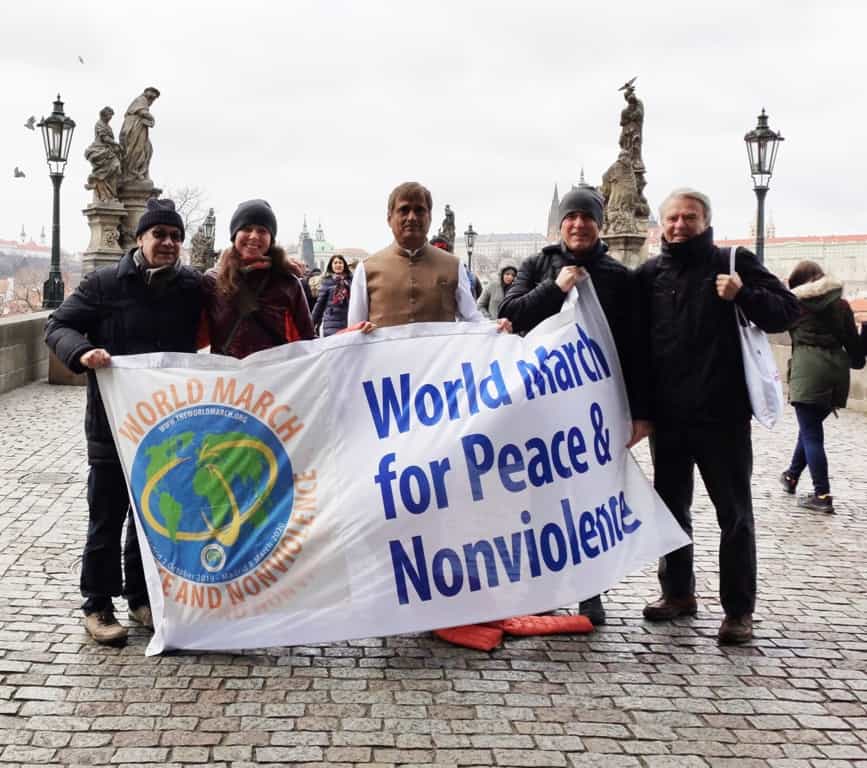 Yesterday, the general coordinator of the World March for Peace and Nonviolence (2nd MM) and founder of the international organization World without Wars and Violence, Rafael de la Rubia of Spain and Mr. Deepak Vyas of India, members of the Base Team of The 2nd MM arrived in Prague.

In 141 days the March has been in 45 countries, over 200 cities on all continents

“We have been 141 days and during this time the World March has carried out activities in 45 countries and around 200 cities on all continents. This was possible thanks to the support of many organizations, and in particular the voluntary and selfless support of thousands of activists around the world. We are in the last stretch already in Europe, from the Czech Republic we are traveling to Croatia, Slovenia, Italy and we will close the World March after circling the planet in Madrid on March 8, on International Women's Day ", said Rafael de La Rubia in a panel discussion, which focused mainly on one of the main objectives of the 2nd WM, namely, to raise awareness about the enormous danger that nuclear weapons represent in the world and a completely new situation that is given by the progressive countries support the Treaty for the Prohibition of Nuclear Weapons approved at the UN on July 7, 2017.

“The situation is that the Treaty has been approved by 122 countries, of which 81 have already signed it and 35 have already ratified it. It is estimated that the number of 50 countries necessary for its entry into force will be reached in the next few months, which will represent an extremely important first step for humanity on the way to its total eradication ”. 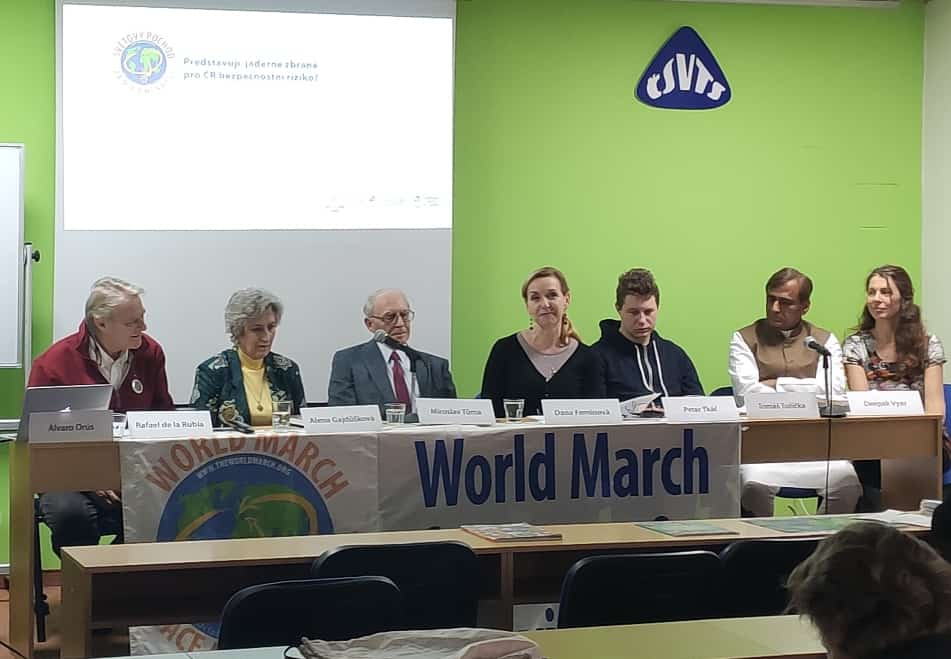 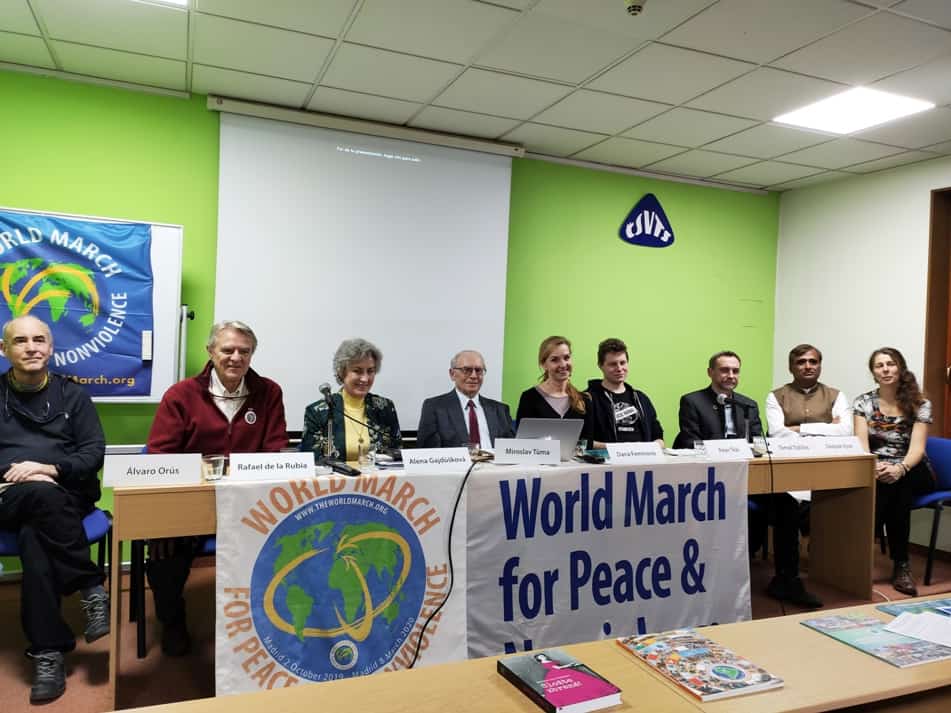 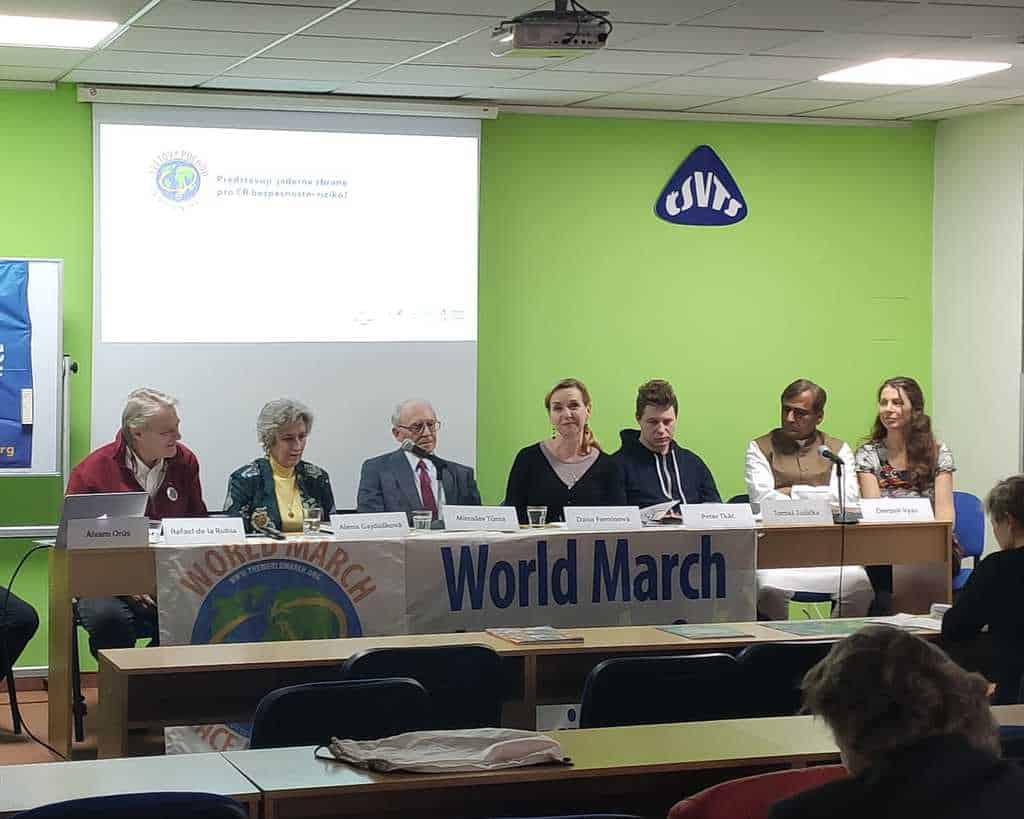 The round table also addressed the situation in the Czech Republic

In his speech, Mr. Miroslav Tůma recalled, among other things, the reasons why at the end of January this year led the Bulletin of the US NGO of Atomic Scientists to warn that the hands of the Clock of Judgment were 100 seconds of midnight, or the end of human civilization. He emphasized the security threat posed by nuclear weapons as a result of its modernization and the possibility of its proliferation under the concept of nuclear deterrence. He also noted the deterioration of security relations between the US. UU. and the Russian Federation, particularly in the area of ​​arms control, and highlighted the importance of international treaties related to nuclear energy, such as the Nuclear Non-Proliferation Treaty (NPT), the Comprehensive Nuclear Test Ban Treaty (CTBT) ) and Treaty on Nuclear Weapons (TPNW).

“Nuclear disarmament is a prerequisite for world peace. On the basis of international agreements, diplomatic negotiations and international cooperation, we must gradually work towards the elimination of all nuclear weapons, including depleted uranium munitions. It is necessary to continue to impose a ban on the development and dissemination of all weapons of mass destruction and to establish an effective international oversight body with a strong mandate, ”said Tomáš Tožička from the Czech branch of Social Watch.

The Czech Republic exports conventional weapons to almost everyone

“In addition to nuclear weapons, the use of which would have disastrous consequences for the entire planet, it should not be forgotten that conventional weapons cause countless victims every day. The Czech Republic exports these weapons practically all over the world ”. We have to talk about how to restrict and control the trade in these weapons. " Said Peter Tkáč from Nesehnutí.

Ms. Alena Gajdůšková, a member of the Chamber of Deputies of the Parliament of the Czech Republic, a member of the PNND, also pledged to influence her colleagues in the Chamber of Deputies to join more members in support of the Treaty on Nuclear Weapons and receive information from Spain. Commitment to a NATO member state to join and ratify the Treaty on nuclear weapons.

After the round table, the participants went to a symbolic “March for peace and non-violence” from Novotný Lávka to Národní, at the Evald cinema, where the premiere of the documentary “The beginning of the end of nuclear weapons” was expected. from 18:00.

The Documentary serves the initiatives and activists that support the TPAN

Its director, Álvaro Orus, from Spain, said before the screening: “It is a documentary produced by the international press agency Pressenza, an agency of voluntary journalists linked to the idea of ​​issues of nonviolence and human rights. It is designed to be useful to all initiatives and activists who seek to support the Treaty on the Prohibition of Nuclear Weapons. 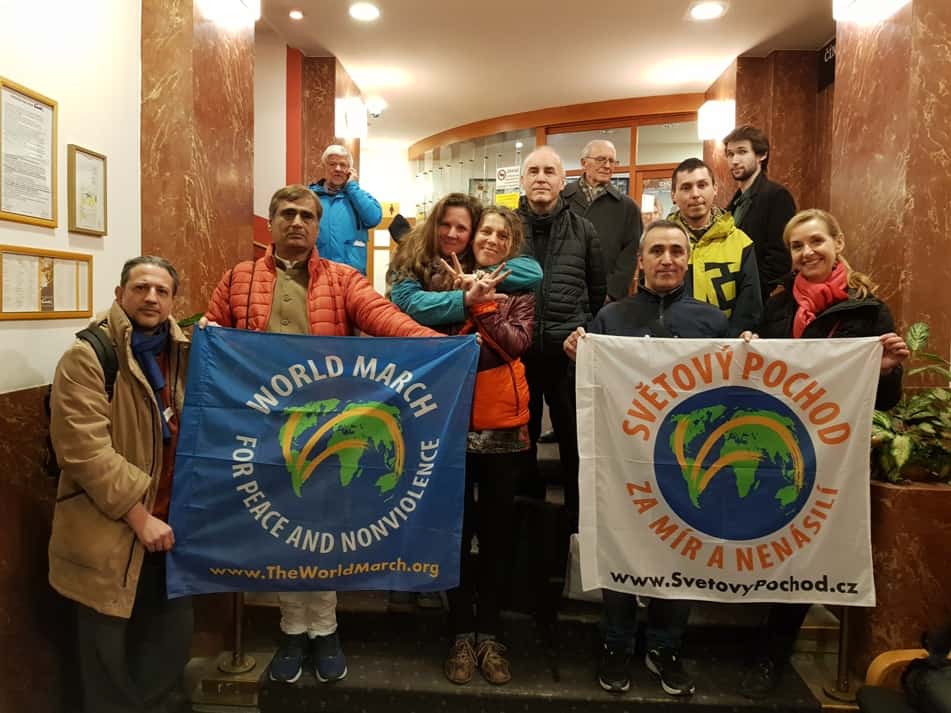 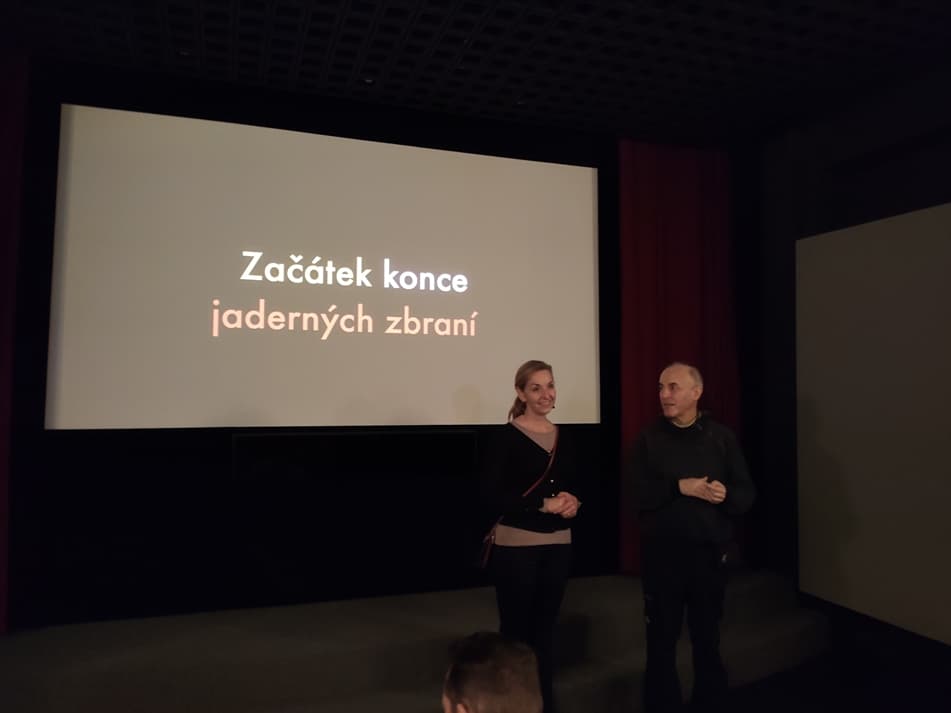 Spain, my country, as well as the Czech Republic, have not supported the creation of the Treaty and we believe that such a decision should not be taken without consulting the citizens who have generally not been informed about it and simply do not know anything. Our goal, therefore, is to break this silence on this issue, raise awareness and encourage citizens of all countries, who are generally against nuclear weapons, to support this ban. "

The entire day of the World March for Peace and Nonviolence ended with the event “Let's give peace a chance” in Wenceslas Square - Bridge. Together, meditation for peace, writing and burning the deepest wishes of all participants in a symbolic fire, as well as music and dance performances were an extremely emotional and enjoyable end to this international gathering in Prague. 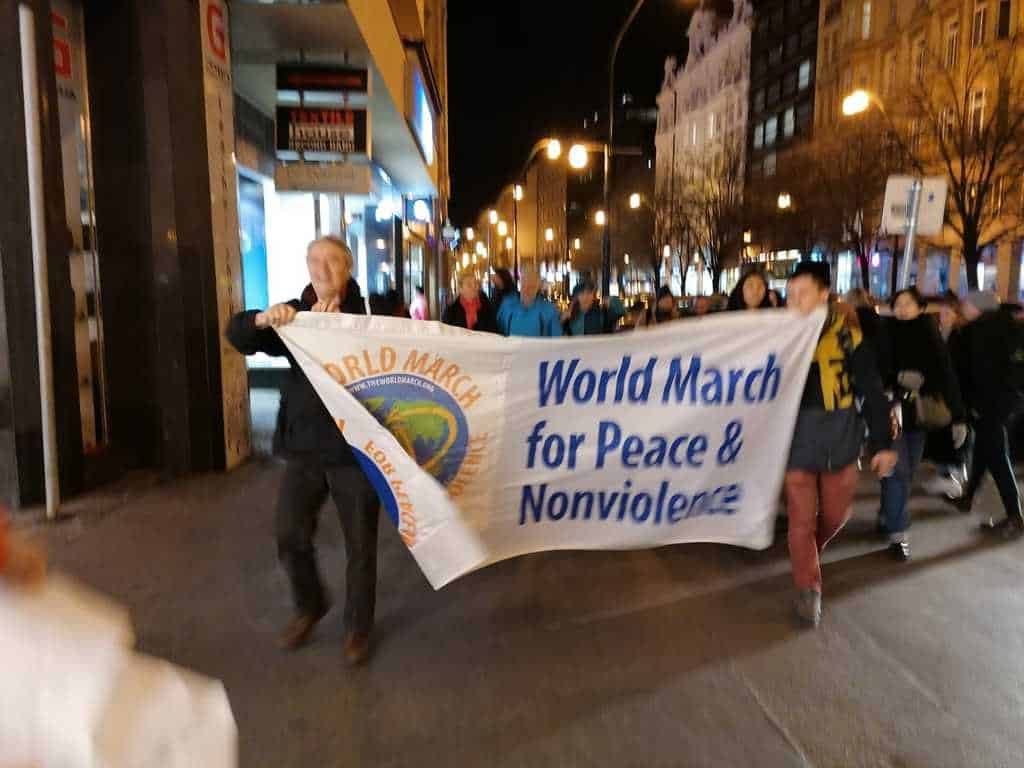 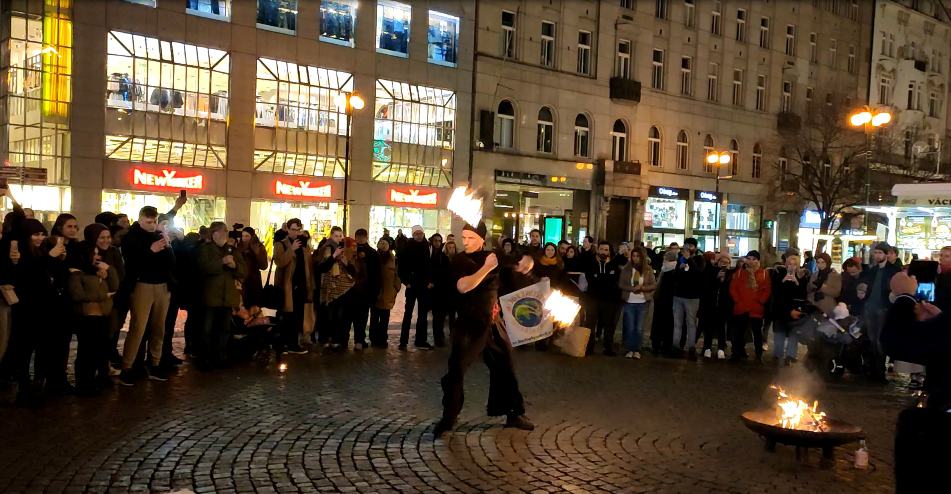 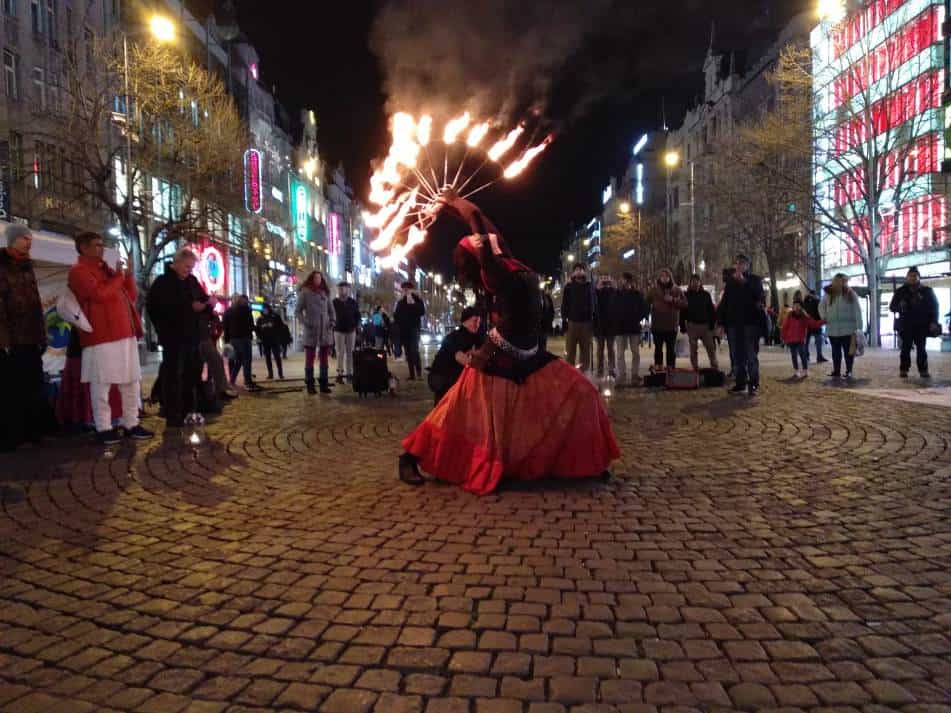 Thank you in advance for your attention to this topic and the publication of the information. We attach some photos of the day.
For the international organization World without wars and without violence.
Dana Feminova

The International Humanist Organization World without Wars and Violence It has been active since 1995 and has since expanded to more than thirty countries around the world. In 2009, it launched the first World March for Peace and Nonviolence, an international project that involves thousands of organizations, institutions, personalities and politicians from almost a hundred countries.

In 2017, the Nobel Peace Prize was awarded for his contribution to the negotiation process of a Treaty on Nuclear Weapons with the International Campaign to Abolish Nuclear Weapons (ICAN), of which the World without Wars and Violence is part.