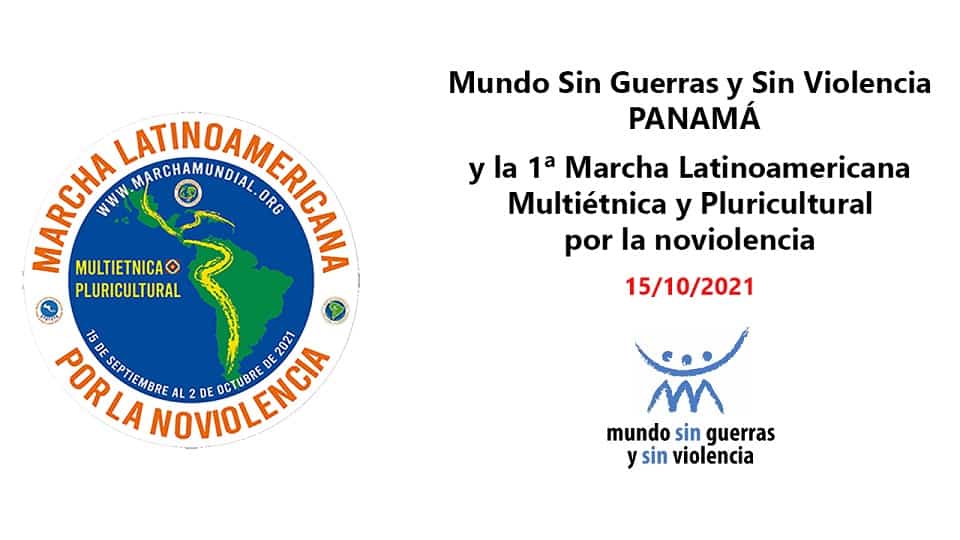 World Without Wars and Violence Panama transmits this statement sharing the activities carried out in the 1st Latin American March for Nonviolence and his gratitude to the participants and collaborating entities:

World without wars and without violence, sent a special invitation to various organizations, entities and media, for their adherence to the activities that we organize within the framework of the Latin American March of Nonviolence, carried out in conjunction with the City of Knowledge in the community of Clayton, Panama City, commemorating in the same way, the international day of peace on September 21 and the day of nonviolence on October 02, 2021.

Panamanian youth were quite participative in the events held by World without wars and without violence Panama, celebrating the Latin American March, thanks to the support of the City of Knowledge and Soka Gakkai from Panama, who said yes to peace and nonviolence in our country.

Maintaining biosecurity measures, on a sunny Tuesday September 21, the first activity was carried out, a human image of the symbol of peace, with the distancing requested by the Panamanian authorities, with the representation of the youth Soka Gakkai and students of the Panama Bilingual Academy for the Future, whose young people have been selected among the most outstanding from different areas of the country, for their academic excellence.

On a bright Friday, October 01, very early, a silent walk was held in the City of Knowledge park, remembering the deceased victims of all kinds of violence, as well as by COVID-19, in Panama and the rest of the world. In the walk, we have the assistance of young volunteers from the Panama Red Cross, students and teachers of the Isaac Rabin College and youth from the Buddhist non-profit organization, Soka Gakkai from Panama. 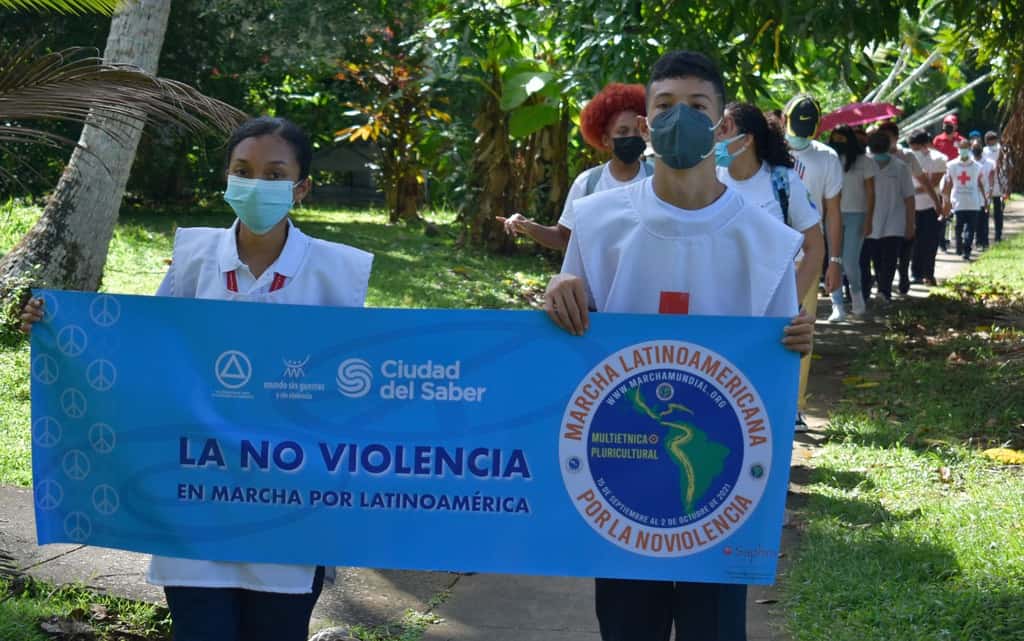 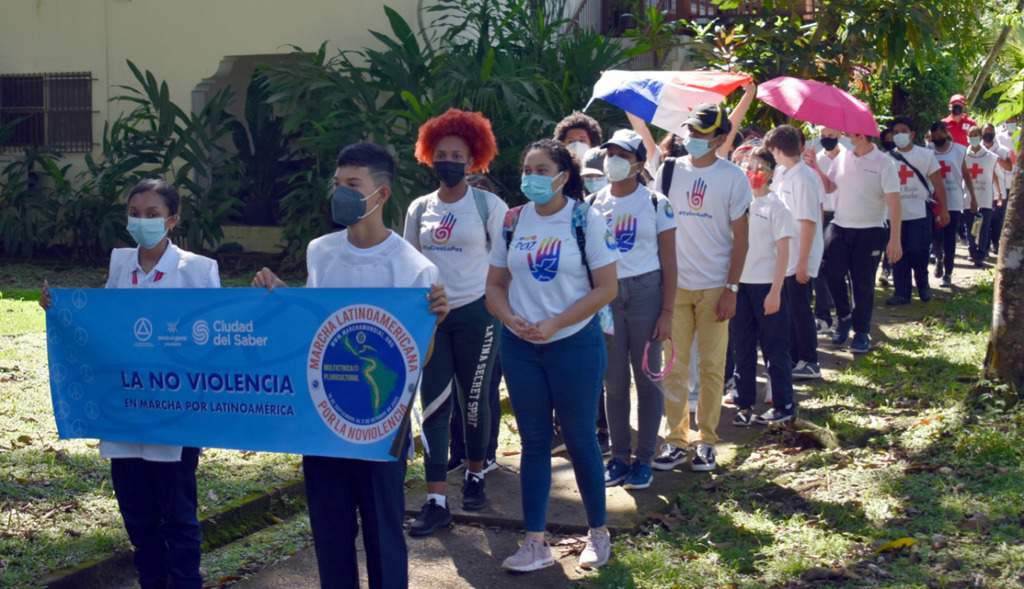 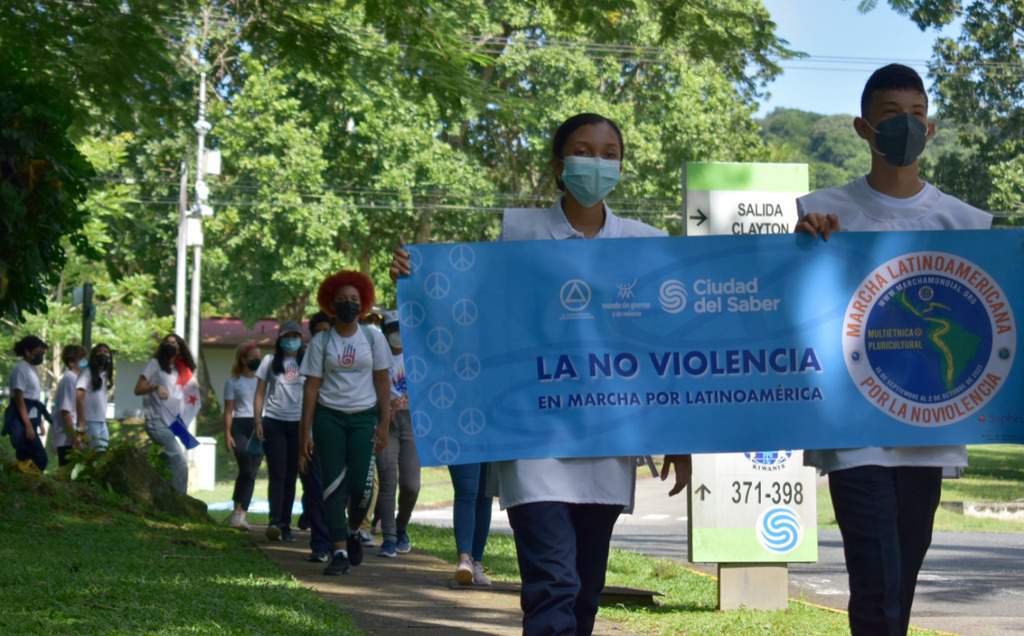 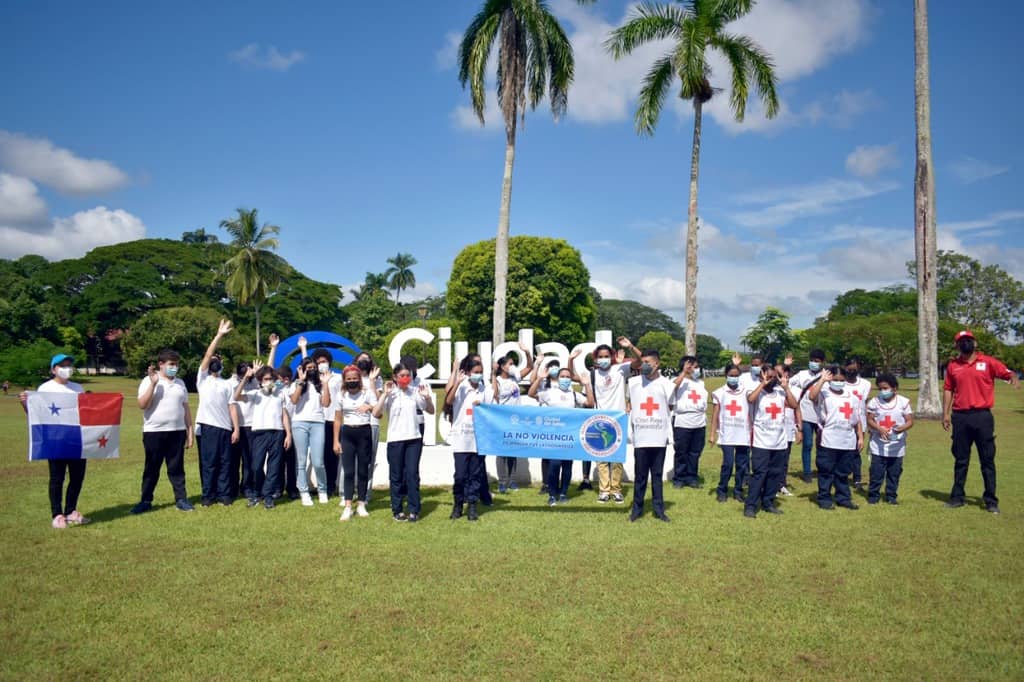 Singer Grettel garibaldi, made the recording of a radio and audiovisual propaganda that was sent to the main stations and television stations of Panama City, in the same way, the young singer gave her musical theme: "Looking for Peace", performed together with the singers Margarita Henríquez, Yamilka Pitre and Brenda Lao, which was designated as the anthem of the Latin American March in Panama, we made the audiovisual edition of the theme, illustrating it with various images of the activities that were being carried out in the Latin American countries of the region during the march and some of the flyers that Mundo made without wars Panama, to promote the Latin American March; It is important to note that the logo that was used in all the countries for the paraphernalia of the march was made by Mundo sin guerras Panamá.

To promote the activities in Panama, live interviews were conducted with Grace Belquis, from World without wars Panama, in the following media: On Saturday, September 18, at 8:00 a.m., on the radio program, "On the edge of the truth", led by the journalist Aquilino Ortega; On Tuesday, September 21, at 14:00 p.m., they participated in the radio program, "Spectacular Evening" hosted by the journalist Didia GallardoBoth programs are part of the programming schedule of the RPC radio station, which has national coverage. An interview was also conducted on the program “We are Culture 247”, Simultaneous broadcast both on the television station and on the Plus station, conducted by the Social Communicator Kristian AlveloOn Wednesday, September 29 at 21:30 p.m., the interview was also broadcast live simultaneously through Plus's Facebook.

Grettel garibaldi was also interviewed in a culture segment that appears on the news Stellar of Sertv, channel 11, conducted by Lorraine NoriegaRegarding the musical theme "Looking for Peace", composed and performed by the singer, and as we mentioned, it was consigned as the anthem of the Latin American March in Panama.

The two activities carried out in the City of Knowledge, Panama, were covered by the drone operator, Mr. Eric Sánchez, who donated the recording of the aerial images of the events, using his own equipment and time to cover the aforementioned events. The members of World without wars and without violence, we are pleased by the participation of Panamanian youth in the activities carried out in the City of Knowledge, we are happy to know that future adults are in tune with peace and nonviolence in our country .

Drafting: Grace Belquis, World without wars and without Violence Panama.