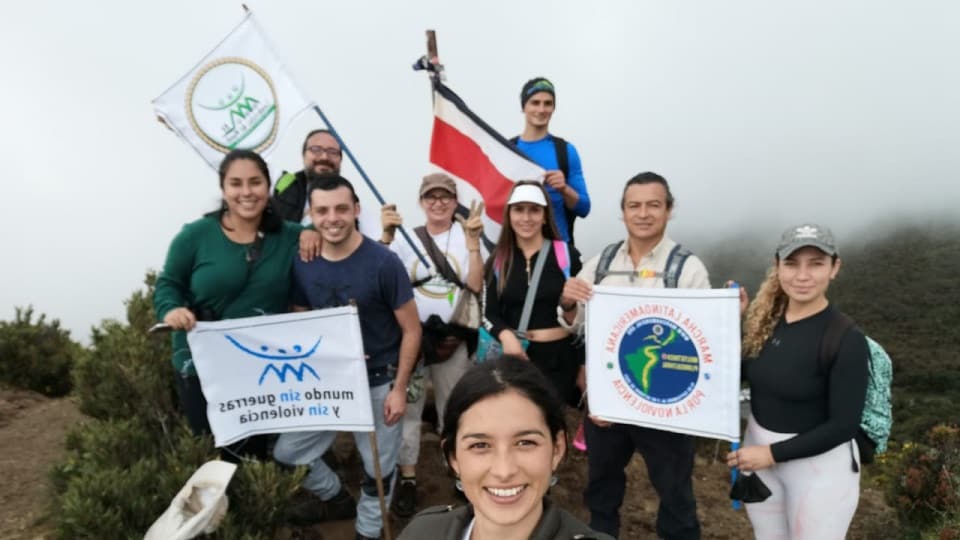 On June 27, 2021, the first official walk of the "World Walkers for Peace and Nonviolence" was held.

This first founding group of the Senderistas for peace and nonviolence, was formed mainly by young people from a town called San Marcos de Tarrazú, and neighbors from the area of ​​the saints, as this region is known, belonging to the Province of San José in Costa Rica. With the collaboration and professional guide in mountaineering issues of Santi Montoya.

According to its guidelines, the objective of this new Action Front of the humanist organization, World without Wars and without violence, is; Promote the creation of a global nonviolent consciousness through hiking.
Through the development of recreational hiking activities, in a group, in a safe and guided way,
where in addition to obtaining the benefits of said activity, work is carried out for the
search for harmony and personal, social, communal development, as well as with nature, towards the elimination of all types of violence that exist.

In these times of difficulty for activism, this concept of mobilization towards the mountains is brought, which is expected to become an option of activity in all 33 countries where World Without Wars and without violence operates, and that serves as a mechanism for social manifestation, as well as for the realization of practices that collaborate in the advancement of growth and internal strengthening of the human being and simultaneously, also serve the development of local projects of social transformation, care for the environment and the interweaving of solidarity networks and humanists, in the communities where it operates.

Organized hiking groups are also expected to join and participate by marching up to their mountains during the First Latin American March for Nonviolence, which will take place from September 15 to October 2.

2 comments on "Trekkers of the World for Peace and Nonviolence"