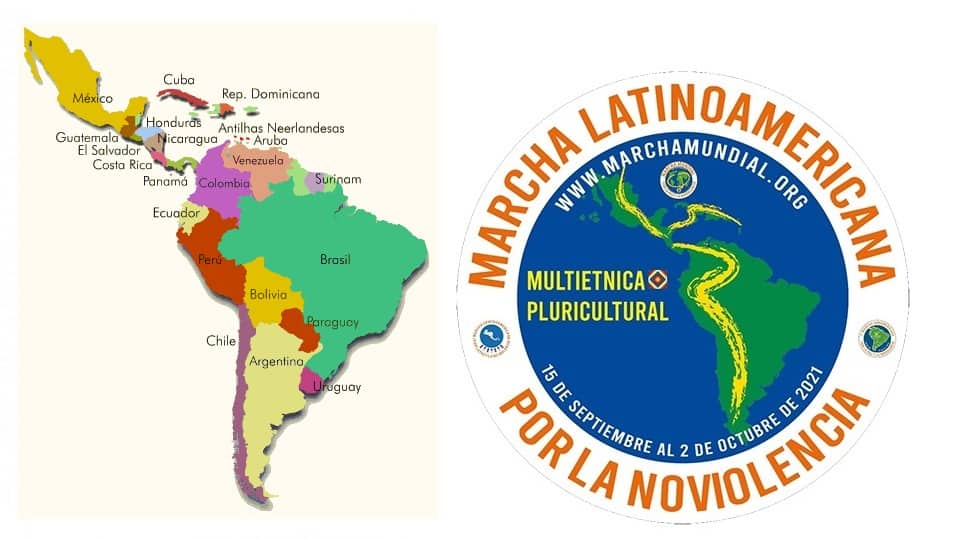 It is no stranger to anyone that violence has long been installed throughout the planet.

In Latin America the peoples, with different nuances, renounce the violent ways that organize societies and bring as a consequence hunger, unemployment, disease and death, submerging human beings in pain and suffering. However, violence has taken over our peoples.

A special mention corresponds to the native peoples, who, deprived of their lands, see their rights violated every day, pushed to live in marginalization.

Can we change the direction of events that herald human calamities of dimensions never before known?

We all have some responsibility for what is happening, we have to make a decision, unite our voice and our feelings, thinking, feeling and acting in the same transforming direction. Let's not expect others to do so.

The union of millions of human beings of different languages, races, beliefs and cultures is necessary to ignite the human conscience with the light of Nonviolence.

The World Association without Wars and Violence, an organism of the Humanist Movement, has promoted and organized together with other groups, marches who travel the territories with the aim of raising a non-violent consciousness making visible the positive actions that many human beings develop in that direction.

Important milestones in this regard have been:

2021- Today we announce with great joy a new march, this time virtual and face-to-face, throughout our beloved region from September 15 to October 2 - FIRST MARCH LATIN AMERICAN- MULTI-ETHNIC AND PLURICULTURAL BY NOVIOLENCE.

We march in the first instance to connect with ourselves, since the first path to travel is the inner path, paying attention to our attitudes, to overcome our own internal violence and treat ourselves with kindness, reconciling ourselves and aspiring to live in coherence and internal drive.

We march putting the Golden Rule as a central value in our relationships, that is, treating others the way we would like to be treated.

We march learning to resolve conflicts in a positive and constructive way, in increasing adaptation to this world that we have the opportunity to transform.

We set out traveling the continent, virtually and in person, to strengthen the voice that cries out for a more world human. We can no longer see so much suffering in our fellow men.

United the Latin American and Caribbean peoples, indigenous peoples, Afro-descendants and inhabitants of this vast territory, we mobilized and marched, to resist the different forms of violence and build a solidary and non-violent society.

In short, we mobilize and march to:

1- Resist and transform all types of violence existing in our societies: physical, gender, verbal, psychological, ideological, economic, racial and religious.

2- Fight for Non-discrimination and equal opportunities as a non-discriminatory public policy, to ensure a fair distribution of wealth.

3- Vindicate our Native Peoples throughout Latin America, recognizing their rights and their ancestral contribution.

4- That states renounce using war as a way to resolve conflicts. Decrease in the budget for the acquisition of all types of weapons.

5- Say No to the installation of foreign military bases, demand the withdrawal of existing ones, and all meddling in foreign territories.

6- Promote the signing and ratification of the Treaty for the Prohibition of Nuclear Weapons (TPAN) throughout the region. Promote the creation of a Treaty of Tratelolco II.

7- Make visible non-violent actions in favor of the construction of a Universal Human Nation, in harmony with our planet.

8- Build spaces where new generations can express themselves and develop, in a nonviolent social environment.

9- Raise awareness about the ecological crisis, global warming and the serious risk generated by open-pit mining, deforestation and the use of pesticides in crops. Unrestricted access to water, as an inalienable human right.

10 Promote cultural, political and economic decolonization in all Latin American countries; for a free Latin America.

11 Achieve free movement of people by eliminating visas between countries in the region and creating a passport for a Latin American citizen.

We aspire that by touring the region and strengthening unity Latin America reconstruct our common history, in the search of convergence in diversity and Nonviolence.

The vast majority of human beings do not want violence, but eliminating it seems impossible. For this reason, we understand that in addition to carry out social actions, we have to work to review the beliefs that surround this supposedly unalterable reality. We have to strengthen our inner faith that we can change, as individuals and as a society.

It is time to connect, mobilize and march for Nonviolence

Nonviolence on the March through Latin America.

Download this manifest: A March for Nonviolence travels through Latin America

4 comments on "A March for Nonviolence travels through Latin America"