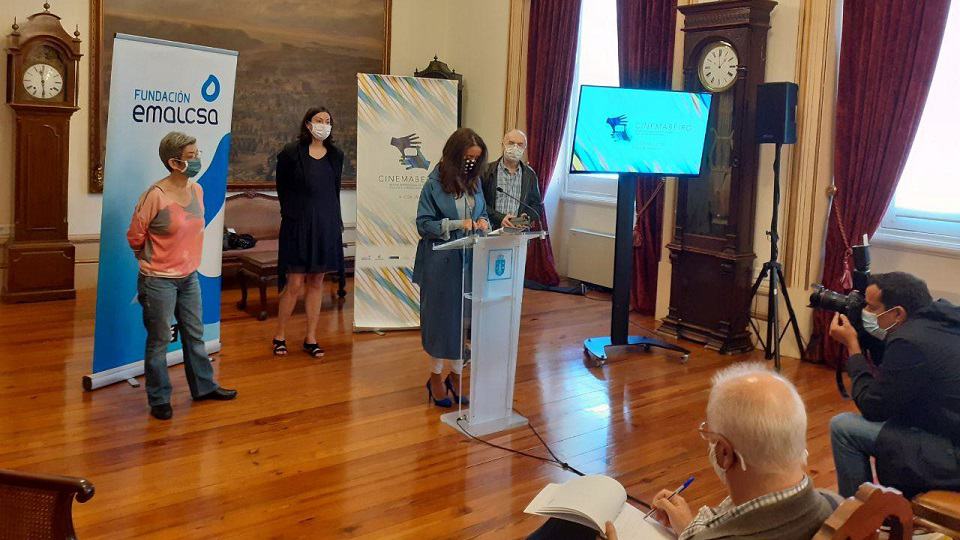 The “I Mostra de Cinema pola Paz e la Nonviolencia”, CINEMABEIRO, has been presented this September 29, 2020 at the A Coruña City Hall.

Organized by Mundo sen Guerras e sen Violencia in collaboration with 16 associations and social groups, the sponsorship of the EMALCSA Foundation and the collaboration of the A Coruña City Council, it will be held on October 2, 3 and 4 using two formats: Online talks and face-to-face screenings in the La Domus building in A Coruña.

María Núñez, programming director of CINEMABEIRO, pointed out as objectives of the Mostra the "social awareness and denunciation of growing conflicts and giving a voice to people of the culture of non-violence".

Yoya Neira, Councilor for Social Welfare of the A Coruña City Council, stressed that "A Coruña will be a benchmark for respect and construction of human rights through culture".

According to its organizers, «CINEMABEIRO was born out of the need to create an event dedicated to promoting, reflecting on and debating Human Rights, not only in the city of A Coruña but also in Galicia.

A very important tool to report and make violence visible

Cinema is a very important tool to denounce and make visible the violence exerted on our rights. It is a window that puts us in contact with other realities; a vindictive speaker who mobilizes us and facilitates our understanding of the world from the commitment to human rights.»

And they continue to explain:

«CINEMABEIRO is a platform for the dissemination of another type of cinema, with a clear social orientation, which aims to bring the public closer to issues such as job insecurity, emigration, gender violence, climate change, equality and inclusion.

CINEMABEIRO, aims to be a specialized Festival

The 1st edition of CINEMABEIRO will become a showcase for the best Human Rights cinema, offering a careful selection of recent feature films and short films, with a wide range of the best festivals in the world.

In this first edition of the “Mostra Internacional de Cinema pola Paz Cinemabeiro” it has four feature films, sixteen short films and five round tables on its program that, due to the COVID-19 crisis, will be held online, with the participation of speakers of NGOs and collaborating associations addressing the problems of the following groups:

It will be completed with several radio interviews with inclusive production companies, carried out by the association of parents of people with cerebral palsy (ASPACE) Coruña in its program 'La radio de los Gatos'.»

CINEMABEIRO, for Mundo sen Guerres e sen Violencia, is part of the campaign this year + Peace + Nonviolence - Nuclear Weapons which is celebrated on a planetary level with a multitude of activities between September 21, 2020 until October 2, 2020.